Even midst snow, slush, and more snow, there are publications, presentations, and podcasts to share and celebrate. Enjoy here some of the recent work from the faculty. 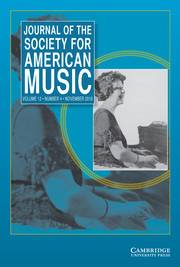 Marian Wilson Kimber’s research on women composers’ concerts at the White House during the 1930s is featured in the current issue of the Journal of the Society for American Music (12:4). Her article illuminates the role of the National League of American Pen Women, who supported “a substantial agenda proposed by Phyllis Fergus, its music director and later president, to achieve national recognition for its composer members.”

Sarah Suhadolnik journeyed to Dublin in January to present her paper, “Placing the Music of the Preservation Hall Jazz Band” at the international Documenting Jazz conference. In this talk, Sarah uses “the Preservation Hall Jazz Band as the basis for a new theory of musical remodelling, a concept that relates music to place, and place to music, as a means of sustaining a sense of cultural permanence.”

Nathan Platte’s book, Making Music in Selznick’s Hollywood (Oxford University Press, 2018), was just named an “Outstanding Academic Title of 2018” by Choice. His new book project on Robert Wise is profiled here by the Obermann Center for Advanced Studies, where Nathan served as a fellow-in-residence.

Trevor Harvey, founding editor of the Ethnomusicology Today podcast, just released the ninth episode, “Performative Ecology in Micronesia.” In this episode Dr. Brian Diettrich “explores the concept of performative ecology in his discussion of ótoomey (summoning breadfruit) and ocean wayfinding and voyaging songs in the islands of Chuuk. Through his study of both historical and present-day musical performances in Chuuk, Diettrich explains how knowledge about social, spiritual, and environmental connectivity is bound up in musical performances.”